Here is what our second month living on our boat, Hanavave, in Tahiti, French Polynesia, was like.

Our trip to Australia was delayed due to port closures throughout the South Pacific. We spent the month making improvements to Hanavave so that we could make the passage to Australia with fewer stops.

We celebrated Jana’s 43rd birthday, spent more time in Ha’apiti Bay on the island of Mo’orea, near Tahiti, and also did some more exploring of Tahiti itself. Jana, Jack, and Stella completed their PADI Open Water Diving Certification at Eleuthera Dive Center with Marie-Charlotte, their awesome dive instructor.

We added another crew member, Evan, from Salem, MA, who will help us with the long trip. The time has finally come to leave Tahiti and make the passage to Australia, which could take up to 30 days at sea. Our current plan is to head off at the end of this week, stopping in Mo’orea, Raiatea and Bora Bora before leaving beautiful French Polynesia and heading for Samoa.

The time has finally come to leave Tahiti and make the passage to Australia, which could take up to 30 days at sea.

How Big Is Too Big?

Lessons From the Road | How Big Is Too Big?instagramfacebookyoutubetwitterDoes Our Built Environment Affect Our Relationships? The “Big Mac” symbolizes the belief that more is better. If one beef patty is good, wouldn’t two beef patties be better? Similarly, the...

END_OF_DOCUMENT_TOKEN_TO_BE_REPLACED

Lessons from the Road | Less is More: Adventure over Stuff

Lessons From the Road | Less is More: Adventure Over StuffinstagramfacebookyoutubetwitterWe have been on the road for about four months, and while that’s a relatively short time, I think that some of the big lessons happen in the initial “adjustment period” of an...

END_OF_DOCUMENT_TOKEN_TO_BE_REPLACED

My 10 Favorite Books of 2020instagramfacebookyoutubetwitterWelcome to 2021! Most of us couldn't wait to see the back of 2020, looking forward to better times with hope and anticipation. If you are at all astrologically inclined like I am, you know that on December...

Sailing Tahiti to Australia | Leg 4: Fiji to Brisbane Passageinstagramfacebookyoutubetwitter  A Long-Awaited Departure After having waited in French Polynesia for two and a half months, we excitedly sailed out of Bora Bora around 7:30 am on Saturday, September 4th....

END_OF_DOCUMENT_TOKEN_TO_BE_REPLACED

After having waited in French Polynesia for two and a half months, we excitedly sailed out of Bora Bora around 7:30 am on Saturday, September 4th. Like the rest of French Polynesia, Bora Bora was in COVID lockdown, and we had spent the last week waiting for our departure paperwork to go through all the requisite bureaucratic channels. This required multiple trips to the local gendarmerie (police station), where Grant quickly befriended the two kind and helpful officers, Alex and Bruno.

END_OF_DOCUMENT_TOKEN_TO_BE_REPLACED

It took us about 24 hours to get from Mo’orea to Bora Bora on August 28 2021. Like the rest of French Polynesia, Bora Bora was in COVID lockdown, and we spent a  week there waiting for our departure paperwork to go through all the requisite bureaucratic channels. This required multiple trips to the local gendarmerie (police station), where Grant quickly befriended the two kind and helpful officers, Alex and Bruno.

We made trips to get water, fuel and provisions, but apart from that we had to stay on the boat. We passed the time snorkeling (saw a giant moray eel!) and inventing new water sports.

Once we received our exit paperwork, we were finally free to leave for Fiji.

Our @jessalfrancis kicked butt in her criterium race in Brisbane last night. Jessa is beyond impressive. She is going to be competing in the National Championships this week and we’ll be cheering her on through the TV.
📷 @jack_gamble_shoots ...

We celebrated Grant’s birthday yesterday by taking the City Cat down the Brisbane River to Bulimba, where we lived 12 years ago and New Farm Park, our favorite park in the city. The City Cat is a great way to see Brisbane and we had a fun day visiting familiar places from long ago. ...

Happy New Year! We wish you all a healthy, peaceful and joyful 2022.

Click the link in our bio for a video that encompasses all our travels over the last 14 months, going backwards from December 2021 to October 2020.

We sold our home and set off from Charlottesville, Virginia on November 1, 2020. For the next 8 months, we traveled in Thelma and Louise, a 40-foot bus and a Jeep. We drove 10,000 miles through the U.S. and Mexico, visiting 11 national parks along the way and spending three months over the winter parked on the beach on the Baja.

We said goodbye to Thelma and Louise in Seattle in June 2021 and moved to Hanavave, a 38-foot Fountaine Pajot catamaran in Tahiti, French Polynesia. For the next four months, we lived aboard the boat, sailing Hanavave from Tahiti to Brisbane, Australia. During our voyage, we spent almost 30 days at sea. While at times difficult, this was an experience of a lifetime for our family.

Our year of travel was deeply transformative for us all both individually and collectively. We chose to sell our home and give ourselves the gift of stepping out of the mainstream to explore the world and ourselves. We emerged full of love and gratitude and with profound clarity on how we want to live and what we want for our kids and their future.

We hope to go forward as stewards of what's truly important: a deep connection to ourselves, each other and our world. We also intend to make our choices with a deep respect for the planet.

While we are now settling in Australia, we will never stop traveling. ...

We had the most amazing couple of days with the White Family at Bald Blair Angus Farm in Guyra, NSW. Not only is this farm incredibly picturesque, but the way the White Family cares for it and its animals is a privilege to witness. ...

Join us so we can share our adventures with you.

Thanks for joining us! Have an awesome day! 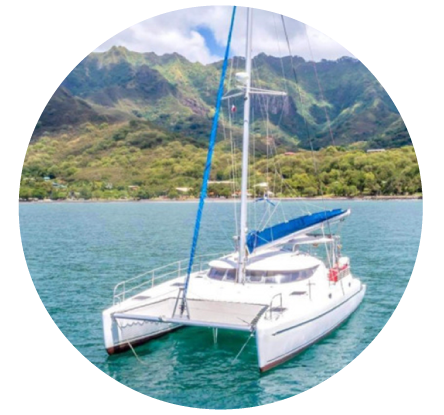 We are currently sailing the South Pacific to Australia.

Thank you for joining us, have a great day!